As the saying goes, “History doesn’t repeat itself, but it often rhymes.” What we’re seeing today, in my view, is an echo of the tech bubble of the late 1990s – a rhyme. And it’s not music to my ears.

Global Developments: Here are the year-to-date returns across asset classes.

The United States: Recent trends in railcar loadings point to softer manufacturing production and trade. A weak profit result from national railway provider CSX fuelled concerns that the protracted trade war is spilling over into real economy. The railway sector is a key leading indicator and proxy for the US economy. CSX, which is a major US rail freight company, posted lower-than-expected quarterly profit and cut its full-year revenue forecast, which caused a 10.3% decline in its share price – the biggest since 2008.

The United States: Goldman Sachs Current Activity Indicator. It peaked in early 2018 (not coincidentally, at least in my opinion, about the time Trump started imposing tariffs on China) and slid further this year. Much of it is due to a manufacturing slowdown, but the consumer and housing segments contributed as well.

The United States: Business and consumer surveys have diverged. The real retail-sales indicator improved in the latest month, moving from a flat trend to a positive trend. While it’s a good sign for the economy, the improvement was offset by a deterioration in real new orders for consumer goods, which weakened from a flat trend to a downtrend. Data related to the consumer are of importance to the outlook given that consumer spending accounts for about 70 percent of gross domestic product.

The United States: The New York Fed’s model showed a 33% chance of recession in the next year. Their next update should show those odds somewhat lower as the Fed seems intent on cutting short-term rates while other concerns raise long-term rates. But it’s still too high for comfort, in my view.

United States: Dr Frank Nothaft, Chief Economist for CoreLogic noted: “Interest rates on fixed-rate mortgages fell by nearly one percentage point between November 2018 and this May. This has been a shot-in-the-arm for home sales. Sales gained momentum in May and annual home-price growth accelerated for the first time since March 2018.”

The United States: Despite US debt levels at multi-decade highs (as % of the GDP), the Federal government continues to enjoy relatively low interest rates (for now). Global debt is certainly higher and riskier today than it was a decade ago, with households, corporates, and governments all ramping up indebtedness

The Eurozone: The Eurozone’s economic data momentum has been recovering this year, Europe continues to enjoy strong growth. Activity has firmed up in many economies, and the forecast is for more of the same. Real GDP increased by 2.8 percent in 2017, up from 1.8 percent in 2016. The expansion is largely driven by domestic demand. Credit growth has finally picked up, which is helping Europe’s banks rebuild profitability. While leading indicators have recently begun to ease, they remain at high levels.

The Eurozone: The euro-area inflation remains relatively soft, which is boosting the probability of the ECB implementing further easing measures.

The Eurozone: The market continues to price in ECB rate cuts this year. Inflation and wage growth remain subdued in most advanced economies and are projected to gather pace only very gradually, given slack in labour markets. 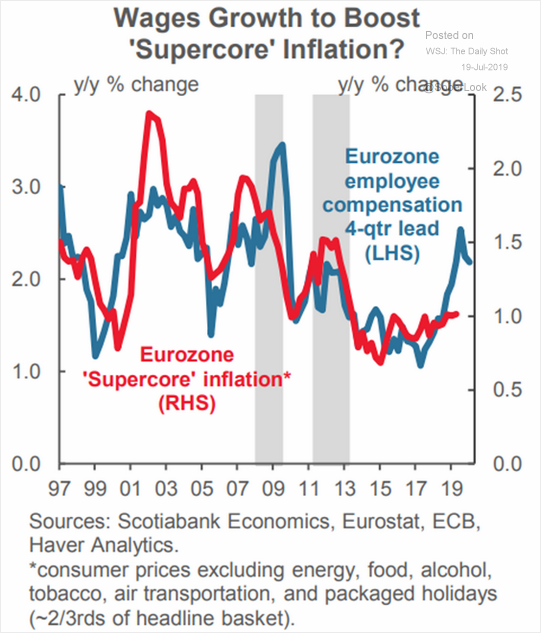 The Eurozone: This chart shows employment growth for France, Germany, and Italy vs. the rest of the Eurozone. The increase in real GDP growth from 0.2% in the fourth quarter of 2018 to 0.4% in the first quarter of 2019 was in part related to specific factors which temporarily boosted growth. Some countries benefited from a spike in foreign demand related to exceptionally strong import demand from theUnited Kingdom, in anticipation of the original Brexit date.

The Eurozone: German retail sales fell in May (second decline in a row). German retail sales decreased for the second month in a row in May, down by 0.6% following an upwardly revised decline of 1% in April. Private consumption strengthened at the start of 2019 and will likely support growth in the second quarter as well. A strong labour market and tepid inflation should leave workers better off and boost purchasing power in the near term. Even so, consumers will likely keep a tight grip on their wallets in coming quarters because of the uncertain outlook. After improving at the start of the year, consumer sentiment dropped again in recent months.

Japan’s core consumer price index increased 0.6% year-on-year in June, matching expectations, while the headline figure increased 0.7%. The core inflation rate in Japan is calculated slightly differently from some other countries as it includes energy but excludes fresh food prices. When stripping out both food and energy, the inflation rate was just 0.5%.

Japan: Industrial production decreased 2.1% year-on-year but increased 2.0% month-on-month in May according to finalised figures from the Ministry of Economy, Trade & Industry. That followed a 0.6% gain in April and was below the initial 2.3% increased estimated.

Japanese exports fell for the seventh month in June as trade tensions continued to weigh and global growth slows exports fell 6.7% year-on-year in June to ¥6.58 trillion, with the percentage fall exceeding the 5.6% drop anticipated by economists. Japan’s trade balance did swing back into a surplus of ¥590 billion after imports fell 5.2% year-on-year, compared to expectations for a 0.4% dip.

Japanese manufacturers business confidence hit a three-month low in July as the sector fretted about slowing growth and trade tensions. The Reuters Tankan poll of mid-to-large companies fell from a reading of 6 in June to 3 in July, with the mood in industries like precision machinery, textiles and paper rather gloomy.

China: The latest headlines about China is that its annualised GDP growth for the April-June quarter slipped to its slowest pace of growth since 1992 at 6.2%, down from the steady 6.4% of the last 2 quarters, however this was in-line with consensus expectations.

China: Consumption has become a larger part of the Chinese economy in recent years, but still has a long runway before it accounts for as much of the economy as in countries like America and Japan. Retail sales were likely boosted by tax and fee cuts from authorities in Beijing seeking to support the slowing economy during the trade conflict with the US.

China: China’s financial conditions have been improving this year. Will the GDP follow? China, growth is expected to decelerate from 6.6 percent in 2018 to 6.2 percent in 2019, predicated on a deceleration in global trade, stable commodity prices, supportive global financial conditions, and the ability of authorities to calibrate supportive monetary and fiscal policies to address external challenges and other headwinds.

Chinese economic releases, new bank loans in China increased to a three-month high as authorities have sought to keep liquidity on tap to support the economy, as growth has slowed during the trade conflict with the US. Chinese banks gave out 1.66 trillion yuan ($241.5b) in net new loans in June, accelerating from the 1.18 trillion extended in May, but slightly less than the 1.7 trillion expected.

China: Home price appreciation remains robust. A new report indicates that residential property prices began to “overheat” in at least 23 major Chinese cities in the first quarter of 2019. According to the report 23 out of the 100 cities monitored fell into the category of “overheating” in the first quarter, with the Guangdong province city of Zhongshan seeing the largest average price increase at 61%.

China: Housing inventory-to-sales ratio continues to trend lower. The ratio between debt incurred by families and gross domestic product – known as the household leverage ratio – surged to 49 per cent at the end of last year from 17.9 per cent at the end of 2008, according to data compiled by the National Institution for Finance and Development, a state-backed think-tank in Beijing. It showed that Chinese households in general are accumulating debts at a pace that has never seen before.

China: Large company sentiment is weakening. The figures suggest that manufacturers in China are preparing for a downturn due to the collapse in trade talks between the United States and China, which will result in an increase in both the level and scale of tariffs on Chinese imports to the US.

China: The impact of the US trade tariffs, higher domestic costs for labour, energy and rents, as well as the risk of higher business taxes next year is threatening the survival of tens of thousands of small Chinese export-oriented businesses. Guangdong provincial government announced on Monday a series of measures to bring down business costs, including reducing corporate taxes, social taxes and land costs. Last week, it also amended a set of rules regulating foreign investment, in which it emphasised supporting automotive and plane manufacturing by wholly foreign-owned companies.

Australia: Will the RBA’s dovish stance ultimately push the Australian dollar lower? The Aussie seemed to be torn between delivery of a rate cut that was not fully priced for this meeting and the statement wording which suggested no urgency to cut again.

Australia: RBA stated that a lack of progress in returning inflation to its target, along with a sustained increase in Australia’s unemployment rate, were two triggers that could warrant a further reduction in Australia’s cash rate.

Australia: The Australian Bureau of Statistics data showed headline the unemployment rate steady at 5.2% for the third straight month, broadly in line with market expectations, but remaining above the 5.0% level the Reserve Bank of Australia had forecast for the June quarter. The 5.2% level marks the highest rate since August 2018.

Australia: The pace of price falls is clearly slowing, although there’s no sign of stabilisation just yet. If you look at prior cycles, an increase in house prices occurred five to seven months after the trough in the annualised growth rate. Using the average of six months, prices could rise by July.

Australia: “The near-term outlook for retail is suddenly brighter, with several factors working in its favour,” Shane Oliver said following the release of the April report. First, lower interest rates will free up a little cash for millions of Australian households. Anything from two to four rate cuts appears possible over the next year. Second, the minimum wage increases by 3% on 1st July, providing support for low-income earners. Third, the federal government’s tax offset will provide an immediate boost to household incomes, although admittedly there is uncertainty surrounding the timing of the full tax offset.