Global Developments: Rate differentials between the US and other economies suggest that the dollar should be weaker. The world needs dollars to buy safe assets from the United States. This, combined with the reserve-currency role held by the dollar, raises demand for the dollar, making it more expensive. As long as the U.S. remains the main supplier of safe assets to the world, the dollar will continue to be relatively pricey, and the U.S. will probably continue to run trade deficits.

United States: The recent curve inversion has been shorter and shallower than the previous ones. This chart shows the spread between the 10yr Treasury and the fed funds rate Bloomberg. Economics created a model to determine America’s recession odds. Right now, the indicator estimates the chance of a U.S. recession at some point in the next year is 27%. That’s higher than it was a year ago but lower than before the last recession. There are reasons to keep a close eye on the economy but no need to panic yet.

Equities: The recent run of soft survey data suggests that an imminent rebound in global GDP growth is unlikely and that concerns about slowing growth and trade tensions may now be taking a toll on service sector activity. We still expect world GDP growth to slow into early next year; for both 2019 and 2020, growth is forecast to average 2.5%, the weakest since 2009.

Equities: Here is the put-call ratio for the S&P 500. The SPX Put/Call Ratio is an indicator that is used to gauge market sentiment. This is calculated as the ratio between trading S&P 500 put options and S&P call options. A high put/call ratio can indicate fear in the markets, while a low ratio indicates confidence.

United States: US economy slowed less than expected in the third quarter according to data from the Commerce Department, as robust consumer spending and growth in government spending offset a further contraction in business investment. The US economy grew at an annualized rate of 1.9% in the third quarter, slowing only marginally from the 2.0% pace in the second quarter and surpassing expectations for growth to slow to 1.6%.

United States: The non-farm payrolls report Friday showed 128,000 jobs added in October, exceeding expectations, despite the headwind from the General Motors (GM) workers’ strike. The motor vehicles and parts industry saw a decline of 42k roles, a flow on from the strike which has since been settled. There were some solid job gains in the hospitality industry (+61k), healthcare (+34k) and business services (+22k). The overall 128,000 job additions topped market expectations for an increase of 75,000 and followed an upwardly revised 180,000 jobs added in September.

United States: The unemployment rate inched up from 3.5% in September to 3.6% in October but remains around 50-year lows and was in line with expectations. Average hourly earnings edged up 0.1% taking the annual gain to 3.0%. Overall, the reports showed a healthy labour market and highlight an economy holding up reasonably well despite some headwinds.

United States: Orders for durable goods fell more than expected in September, sliding 1.1% month-on-month. That followed an upwardly revised 0.3% increase in August and compared to expectations for a 0.8% decrease. There was weakness in several areas, with transportation (-2.7%) leading the way. The volatile commercial aircraft category slumped 11.8% following a 17.2% fall in August. The Boeing 737 MAX woes are dragging on the category. In autos, the strikes at GM impacted auto production and possibly had a flow on to orders; but should be over soon. Orders for non-defence capital goods excluding aircraft, considered a proxy for business investment spending, was down 0.5% after sliding 0.6% in August.

United States: There was a green shoot from manufacturing data, with the IHS Markit US Manufacturing PMI edging up to 51.5 in October from 51.1 in September. The flash (preliminary) estimate topped market expectations of 50.7. It was the strongest expansion in factory activity since April, and output, new orders and employment all grew at a faster pace than in the previous month. The data was welcome after a string of weak manufacturing data this year, as the sector battled in the face of the trade conflict and global growth slowing.

The Eurozone: Economists keep downgrading their euro-area 2020 growth forecasts. One obvious source of weak trade dynamics is the uncertainty surrounding the international trading system, due to the rise of protectionism and geopolitical factors. Although the direct effects of individual tariff measures on economic activity have been contained, prolonged uncertainty and the prospect of an escalation of trade disputes are indirectly affecting the world economy by weighing on economic sentiment and global investment.

The Eurozone: Chief Business Economist at HIS Markit said of the Eurozone PMI data: “The eurozone economy started the fourth quarter mired close to stagnation, with the flash PMI pointing to a quarterly GDP growth rate of just under 0.1%.” He continued, “The manufacturing downturn remains the fiercest since 2012, and continues to infect the service sector, where October saw the smallest increase in new work for almost five years.”

The Eurozone: The strength of employment growth has been a central feature of the euro area recovery in recent years and, so far, the labour market has been relatively resilient to the current slowdown. Employment is still increasing: the number of people employed has risen by 11.2 million since the employment trough in mid-2013. The unemployment rate stands at 7.5 percent, its lowest level since July 2008.

The Eurozone: Loan growth has diverged from the GDP, which doesn’t appear to be sustainable. lower growth could cause highly indebted enterprises to cut back on investment and possibly have difficulty in servicing debts. This, in turn, could hurt the balance sheets of institutional investors.

The United Kingdom: The new forecasts come amid prolonged Brexit uncertainty, with the U.K.’s exit date now pushed back until Jan. 31 and an election on Dec. 12 further complicating the picture. In such situations the convention is for policy makers to compile forecasts based on the incumbent government’s policy, namely leaving the European Union with Boris Johnson’s Brexit deal at the end of January.

The United Kingdom: Households’ liquidity growth points to a rebound in consumption. Consumer spending has continued to drive the economy, but the housing market has cooled, and job creation is likely to slow over the next year. Business investment has been on a declining trend as a result of ongoing Brexit-related uncertainty and this is expected to continue until this is resolved.

China: The National Bureau of Statistics of China has released more data pointing towards weakness in the world’s second largest economy. In the third quarter of 2019, the country’s gross domestic product (GDP) grew by 6.0 percent, a decline on the 6.2 percent recorded in the second quarter. While that sounds great from a U.S. or European perspective, different standards apply to the previously booming Chinese economy, where current growth levels are the lowest for 27 years.

China: The private Caixin manufacturing PMI headline reading came in at 51.7 in October, edging up from 51.4 in September, topping expectations for a reading of 51.0. It represented the fastest rate of expansion in the sector since February 2017 and the fourth straight month of improvement. Domestic and foreign demand improved materially, and new export orders returned to expansionary levels.

China: The World Economics SMI indicators point to a rebound in business activity in October.

China: Crude oil imports have been climbing much faster than the demand for fuel. It suggests that China may be adding to its strategic oil stockpile. China’s crude oil imports in September rose 10.8% from a year earlier as refiners ramped up output amid stable profit margins and solid fuel demand.

China: More than 2 trillion yuan ($283 billion) of local-government notes will mature in 2020, according to Bloomberg-compiled data — a record and 58% more than this year’s level. This means fresh debt to refinance the borrowing could start hitting the market shortly. A report Tuesday said the southern province of Guangdong may sell notes as early as November.

China: The deadly swine fever has placed an additional drag on the Chinese economy over the past year. China, the world’s biggest producer of pork, has struggled to control the disease even after slaughtering more than one million pigs. The supply shortage has sent pork prices soaring – by 46.7% in August on a year earlier- and that is eating into household incomes.

Japan: The Jibun Bank Japan Manufacturing PMI felling to 48.5 in October 2019 from a final 48.9 reading in September and below expectations for a reading of 48.8. It was the sixth straight month of contraction. New orders fell at the fastest rate in almost seven years as the trade conflict and global growth slowdown weighed.

Japan: On the local data front, retail sales in Japan surged by the most in over five years in September, with Japanese consumers choosing to front run a hike in the consumption tax that went into effect at the beginning of October Retail sales jumped 9.1% year-on-year in September, far exceeding expectations for a 6.9% increase. It was the biggest increase in retail trade since March of 2014, which was the month prior to the last increase in the tax. Last month’s strong rise was largely due to an increase in spending on general merchandise as households took the opportunity to stock up before prices rose.

Australia: While a rate cut isn’t forecasted for the rest of 2019, two thirds (64 per cent) of experts surveyed by Finder are predicting that the RBA will cut again in February 2019, which would bring the cash rate to 0.50 per cent.

Australia: Economists say every time the Fed funds rate falls, and the Australian dollar rises on the back of it, the associated damage to the Australian economy is the equivalent to the Reserve Bank raising the cash rate — an unthinkable policy move in the current climate.

Australia: Most people equate interest-rate cuts, particularly when you’re already at record-lows, as an indication that something is going wrong. “They may not quite know what it is, but clearly there’s a message,” said Michael Blythe of Commonwealth Bank of Australia. “It makes the typical household more cautious. So, you’re less inclined to spend, more inclined to save. So, you’re not getting the positive impact that you’d hoped from the rate cuts.” 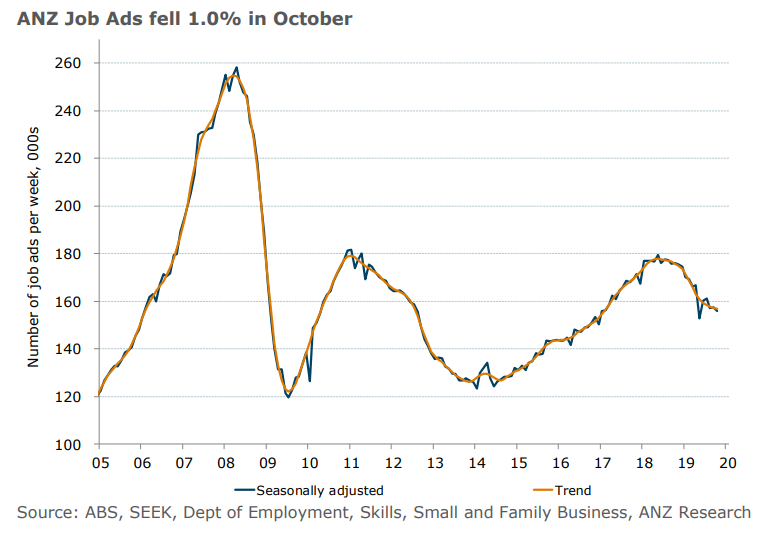 Australia: ANZ Job Ads resumed their downward trajectory in October, following some stabilisation in September. Job Ads are now at their lowest level since January 2017 (aside from the holiday-affected May result). The ANZ Job Ads series has been pointing to a material slowdown in employment growth for some time; yet employment growth has been remarkably resilient. We don’t expect it can hold up for much longer though. Employment in the construction industry should continue to fall as.

Australia: The export sector is still flourishing and starting to rub off on other areas of the economy. Producer prices from the ABS on Friday rose 0.4% in the September quarter. Confidence is increasingly flowing through to the manufacturing sector – output here has risen 3.3% over the past 12 months. There have also been some bright spots for the consumer, and it will be interesting to see how the retails sales number pans out today – interest rate and tax cuts should have had a positive impact.

Australia: It’s becoming increasingly clear that the housing market rebound is gathering pace, both geographically and across the broad valuation cohorts, off the back of lower mortgage rates and improved access to credit, as well as an improvement in affordability relative to the market peak several years ago and consistently high demand via population growth.